It was during the year of1990 that God brought us into the Victory family and this is how it began. In 1963 my classroom teacher led me into a personal experience with Jesus. I accepted Jesus as my Lord & Saviour and committed my life to becoming a national missionary in the mostly unreached north of India. My wife Lizy gave her heart to the Lord in 1959 when she was just 9 years old. I started ministering right away in 1963 and by God’s sovereign guidance, we were married in 1974 and we both worked in the college and school respectively.

In 1976,the Lord reminded me of my commitment to serve Him full time and led me to go to Agra. Agra was the “School of Hard Knocks” for us, as we were intimidated and beaten for Christ and our house was ransacked right in front of our eyes. Even during the City Wide Gospel Crusades that we were spearheading in the 80’s & 90’s, we were met with fierce and heavy opposition. Hand grenades were thrown in the meetings, the opponents of the Gospel destroyed electric bulbs and generators and yet none of these things moved us. The grace of God was sufficient for us to bear these persecutions with joy and no matter what they did we gave them the Gospel of love.

“The grace of God was sufficient for us to bear these persecutions with joy and no matter what they did we gave them the Gospel of love.”

In 1990 God brought us to Victory Churches International. First we joined with the Bible College and it became Victory Bible Colleges of India. The next year we joined the International Victory family with all of our churches. What attracted us at that time was the commitment of Drs. George and Hazel toward Church Planting and World Missions. Their move from Lethbridge to Calgary challenged Lizy and I so much that when God told us to move to Delhi, it was very easy for us to decide. Many leadership teams and women’s teams have come from VCI Canada and have been such a blessing for the churches and leaders of VCI India.

Victory Churches International has initiated many missions projects, like helping to purchase lands, vehicles, constructing church and multi-purpose buildings, a Bible College building in Agra and helping in the purchase and building of the Head Quarters in New Delhi. They have helped to start orphanages, sewing schools, installed hand pumps for drinking water in rural areas, supported slum schools, helped in reaching the poor and destitute children through the Global Christmas Feeding Program. As well, some of the Canadian Victory Churches helped with slum schools, feeding the poor and building a kitchen for the slum school children.

There is ongoing involvement from VCI and we are thankful to God for helping Lizy and I in raising many leaders in India. Succession is not a big issue, as many leaders are raised with our Victory DNA. We are not only planting one Church in every district of India, we are taking the Good News of God’s love to thousands of suffering people through our Blessing Festivals. Many people are getting blessed and healed by the power in the name of Jesus. God told us to leave a legacy behind us and that is just what we are doing. 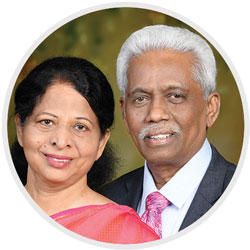