The History of VCI

In this set of videos, Ralph Molyneux interviews Drs. George and Hazel Hill and discusses the history of VCI and church planting.

This pioneer, grass roots, apostolic and prophetic movement with a strong church planting heart is purpose driven. We are dedicated to reach as many people with the Gospel of Jesus Christ as is possible before His return, fulfilling the GREAT commission.

Drs. George and Hazel Hill are the founders of Victory Churches International, a church planting organization in 40 nations around the world. The Victory movement began in 1979, with the Hills planting and pastoring their first church in Lethbridge, Alberta, Canada. This soon grew to be one of the largest charismatic churches in Canada at that time. In 1988, with five churches established in southern Alberta, Victory Churches of Canada was formed.

Victory Missions Department is active in many third world nations building orphanages, implementing literacy and skills training programs and feeding the poor. Leaders are trained and released within their nation to win the lost for Christ. Our motto is simple. We will not just hand out fruit but we will plant as many trees as is possible in every nation through the planting of church-planting churches. Every tree has a limit to it's potential growth but a forest has no limit as to how large it can grow! We will not just hand out fish to the nations but will give the nationals a hook and teach them how to fish. We will think globally and act locally.

Women of Victory Ministries, is a ministry by Victory women, to women and children around the world. The Ministry focuses on educating, training and releasing women into their God-given destinies, causing them to become respected, productive members of our societies.

The longer-term objective of Victory Churches International is to establish at least another 200 churches across Canada and another 3000 churches around the world by the year 2010. The international head office for Victory Churches International is located in Calgary, Alberta, Canada. Head offices are also located in each nation where the Victory Family of Churches has spread over the past 30 years of ministry, with an emphasis on Orange County, California where Drs. George and Hazel Hill reside.

For the full history and background of Victory Churches International, order the autobiography :

Adventure, Romance and Revival  by Drs. George and Hazel Hill

This is the story of two adventurous people from the opposite sides of the world, who left their families and countries in search of adventure. Their encounter with Jesus Christ set them on a dynamic course and adventure that has affected hundreds of thousands of lives around the world. Drs. George and Hazel Hill are the founders of Victory Churches International, one of the fastest growing church planting movements in North America. 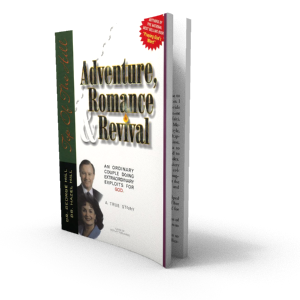